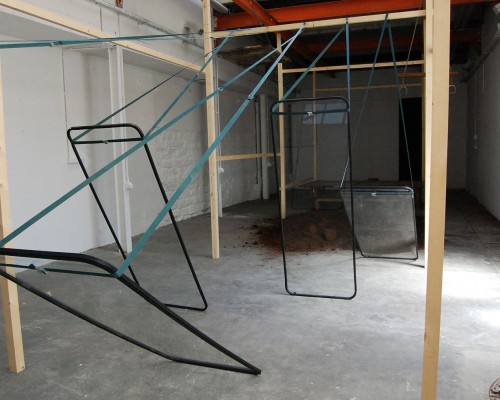 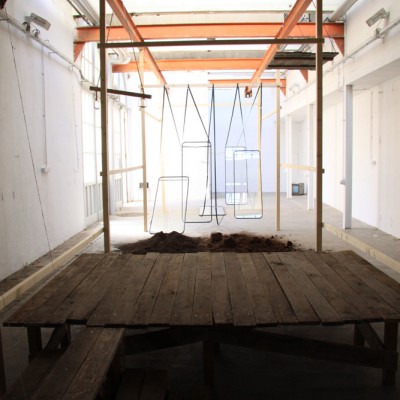 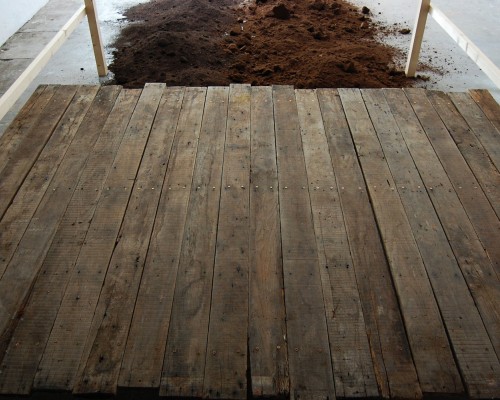 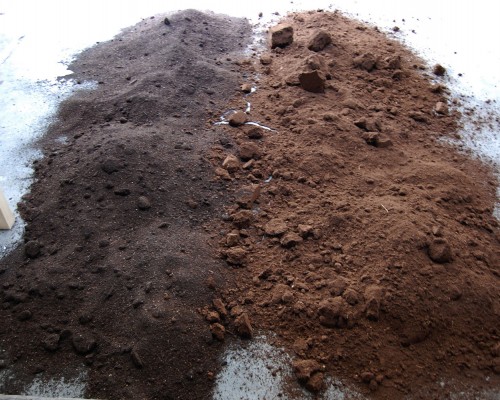 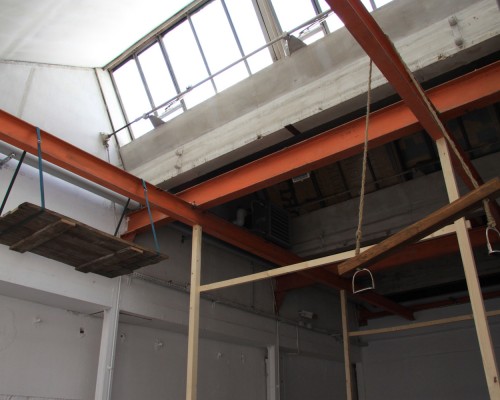 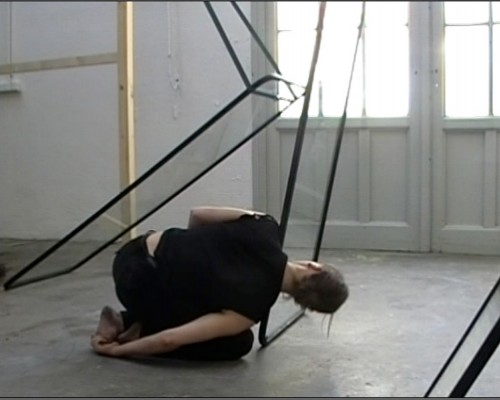 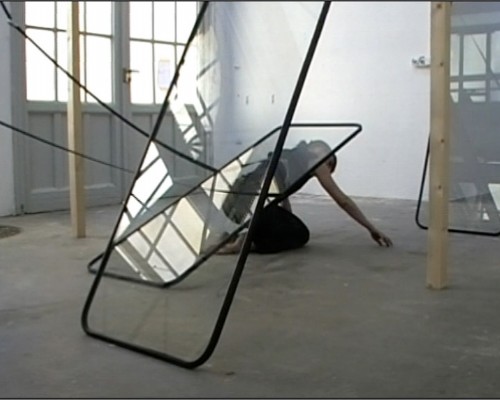 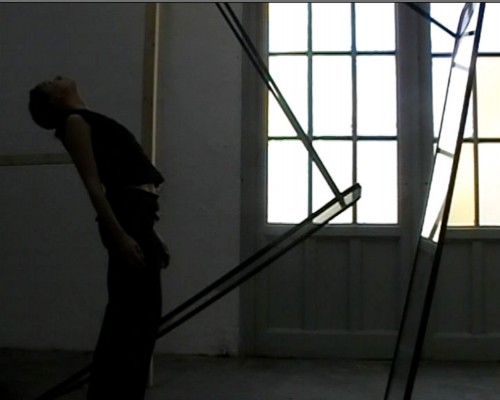 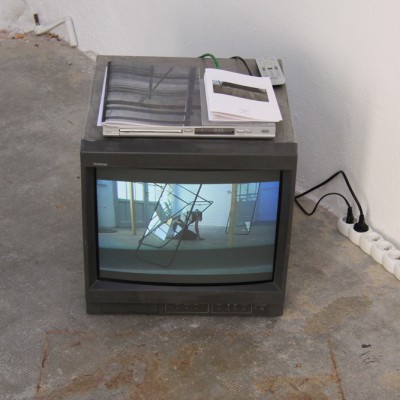 This Title of this installation came from a lapsus. « vestige » (remains, ruins) became « vertigo ». A vestige is the remains of something that was destroyed. Built to be damaged, it becomes ruin because of the visitors’ coming and goings. Temporalities meet.

Built as a corridor, this art piece suggests from the very beginning, that a choice has to be made: Either climbing unordered stairs to try and reach the dangerous stage, where things are highlighted, and experience the space offered at sight, or contemplating it from outside. »The artist doesn’t want to educate the spectator. He forbids himself from using the stage to teach a lesson, or carry a message. He just wants to produce a type of consciousness, a strong feeling, an energy for an action. » Le spectator émancipé, Jacques Rancière.This base, built as a scaffold, is a space of Freedom, of Unexpected, of Kaïros. A kind of shelter where the body is offered the possibility to act, to be conscious of Action and Time. Each gesture can influence the actor’s future. Entropy interacts with the Space’s inertia, thanks to the traces left. This space decays, the wood breaks, the windows fall. The space is imprinted with the human transient presence, recorded in the matter. The visitor is confronted to a present temporality,a pleasure in the control of his own body, even without knowing the future and possible repercussions.. »The road we follow through time, is covered with the remains of the things we were starting to become, and everything we could have become » Henri Bergson.The construction is codified in order for the daily movements to be challenged to another posture. « The Energy for Action » becomes tangible at this stage, thanks to the impulsivity created by the space, its different levels and heights which imply that the visitor will fall, or struggle, and therefore be aware of the current time, and focus on his existing state.Composed of pieces that were thought separately, all these installations are made from waste, found in the street.

The stairs and the stage, which used to be a partition wall, question the evolution of the body within the space. The stairs are not in order and do not lead anywhere, the stage is empty. The fact that it is higher allows the visitor to see a landscape unravelling before him, and the obstacles he will have to be confronted to. The wood is old, used, it cracks under the visitor’s weight, it resists.

Then comes the time for another choice to be made. On one side, a fresh soil, and on the other side, a century old soil, full of worms. The traces of the presence are imprinted in the soil, moving texture where the wander makes sense, thanks to the human will. It is trampled, plowed.

Entropy is involved in a temporal process of chaos. The Action is a necessity, the gesture is irreversible. The visitor becomes actor, he inhabits the Time.
Nethertheless, there is a way out. the Trapeze tells us about its state, a remain. Its surroundings draw its meaning, « what is left » in japanese. It tells the story of something unfinished, something impossible, a failure. « to give a leg up » is to act in order to help, to make a situation evolve. But its height makes it impossible to be reached, and hope drops. As for the springboard, it gives access to a new level, another point of view. it offers a emergency exit, an end as well as a fall.
The windows reflect our image without being a perfect mirror because of their transparency. While they used to be protective elements, ambulance windscreens, they become tense objects, placed in a critical state. They block the way, and put the body at risk.

This installation made of fresh wood, implies a human intervention for it to age. The ruined space tolerates the body. Its recent past was marked by a physical presence, a dance where each move ends the previous one. As the body wanders, the inhabited space becomes deserted. But the traces of a presence remain. The ruin, entered for the first time, becomes a place of possibilities for the mind and the spirit. This land leaves space for unforeseen actions.
When the walls, which are the remains of the ruins, perspire his story, the visitor, the tourist, becomes fully aware and conscious of the possibilities in this disrupted surface, and can notice the scars from the chaos, as a possibility for freedom, a place where everything has to be remade, a zone out of time.
In the background, a film is showcased in a loop. It is the dance proposal by Carole Quettier, one of Daniel Dobbels’ dancers. This improvisation was staged three days before graduation day.

She tries out the materials, their resistance. She stamps smoothly, pushes slowly. Each step is thought through, studied, controlled. Carole Quettier’s proposal is one of a professional dancer. The choices and suggestions are endless, her body can endorse torsions, it can take risks, it is daring. It doesn’t dictate a posture to adopt for the next visitor, and it gives memory to the space. The screen in the background is a memory of the past, a testimony, an archive.
The disrupted space can be noticed from the first glance. Soil on the stage, a window on the floor, the trapeze is wobbly. The spectator becomes a witness, and starts doubting his own rights.